Upper Rio Upano valley, southern Sangay National Park, Purshi Sector. This was the highest most extensive, and well preserved Andean forest which reached heights here of over 4,300 meters. It was a mecca for the endangered Mountain Tapirs and was an ideal habitat for them, a place where they thrived and reproduced.

Four-month-old female Mountain Tapir eating a favored Melastomatid plant’s leaves. Note thick woolly fur and white stripes and spots on reddish brown fur. This constitutes excellent camouflage for escaping detection from predators such as the Mountain Lion. Mountain Tapirs have a 13 month gestation period and almost always give birth to single young, though upon occasion they do produce twins. They issue high-pitched squeals and sometimes low-pitched grunts of warning, particularly among mature males.

Tall trees grow in this upper cloud forest on the eastern slope of the Andes in the Magdalena Sector of Sangay National Park, Ecuador. Ecologist Downer traversed six rivers in this park from their source in the treeless paramos to their base exiting the park in the lowland tropical rain forests entering mighty Amazonia. He made many new discoveries, including new species of plants and animals, and worked with both highland Andean Puruhaes and Amazonian Shuar Native Americans, as well as the park rangers and students of ecology and conservation.

Rare photo of the Masked Trogon (Trogon personatus). This colorful bird who hunts flies from his perch is one of the Mountain Tapir’s delightful companions, here inhabiting the cloud forests of El Placer Sector, Sangay National Park at 2,900 meters elevation a.s.l. Bird Family of the famous Quetzales.

The Umbrella Plant (Gunnera Magellanica) is very important to the life of the Mountain Tapir and many other animals. Its large, corrugated leaves as well as its thorny trunk host blue-green algae (Nostoc) and are eaten by the Mountain Tapirs. These leaves grow to over one meter in diameter and serve as shelter for the tapir and many other animals, including the diminutive Pudu Deer as well as the Red Brocket Deer and brightly colored tanagers and many other beautiful and lively birds, insects, etc. Red spike is reproductive.

Photo of strong and vigorous, mature but still young Mountain Tapir we named “Gabriel”. Using a radio collar, we tracked him for years, learning much about the survival requirements and fascinating habits and interrelationships of this species. Note strong upper and lower incisors as well as canine teeth. Also note strong prehensile snout, or proboscis. This is a versatile organ capable of a variety of actions from squirting water in play or at pursuers to gingerly picking delicate leaves and fruits for eating. The Mountain Tapir’s trunk is the same basic type of organ as an Elephant’s trunk, although evolved independently in a case of convergent evolution

Highland cloud forest in the upper Rio Upano drainage, Purshi Sector, Sangay National Park. Note the beautiful medley of colors and forms of the several species of trees present in this very biodiverse ecosystem, which is prime habitat for the endangered Mountain Tapir. Mountain Tapirs contribute much to the ecosystems they inhabit, including dispersing the intact seeds of many different plants that go on to germinate. Craig has published scientific articles on this and related aspects of the life of this fascinating animal of ancient origin which taxonomists place in the Mammalian Order of the Perissodactyla, which includes the Horse, Rhino, and Tapir Families. Mountain tapirs inhabit mountainous regions in the northern Andes from ca. 6,000 feet to 16,000 feet elevation a.s.l.

Pyramid-shaped tall peak is totally covered by Andean forest and reaches ca. 4,300 meters elevation in this upper Purshi Sector of Sangay National Park. This ecosystem is home to literally thousands of species, many as yet unnamed and unknown to science. It is also a vital watershed, source of the Upano River that flows east into the Amazon and also provides water to the Amazonian town of Macas. Craig traversed this river from its source at Laguna Negra to its base entering the flatter portions of the vast Amazon Basin.

A beautiful orchid from the upper cloud forest of Sangay National Park. Some of these had exquisitely tantalizing fragrances which reached out several meters or more to attract their pollinators, often insects but also including other animals like birds, bats, even grounded mammals, reptiles, and amphibians. Craig was also put under the spell of such flowers by their fragrance as well as their beauty of form. The cloud forests of the Andes are centers of origin for the Orchid Family.

A pair of rare highland frogs in upper Culebrillas Sector of Sangay National Park. This is a member of the Dendrobatidae family. The world’s amphibians are in sharp decline world-wide due to a variety of reasons, including air pollution and global warming, as well as forest destruction and capture of animals for sale. A type of fungus-like protist in the Protomycota known as a Chytrid is rising from the lowlands (due to global warming) also threatens many amphibians, not only in the Andes but worldwide. Biologists in Quito were excited to learn this species of frog still survived here.

The magnificent, 17,300-feet-high Sangay Volcano in eruption, December, 1989. This volcano is the longest continuously active one in the Andes and one of the most powerful. Sangay National Park is a World Heritage Site so declared by UNESCO World Heritage Office in Paris. Notice the play of light and shadow where the Earth seems to blend with the Heavens in a majestic way. Along with his team of five including a Native American guide from the Puruhaes, Craig ascended to the top of this volcano on December 6, 1991, a feat that is considered to be one of the maximum attainment among mountain and volcano climbers. 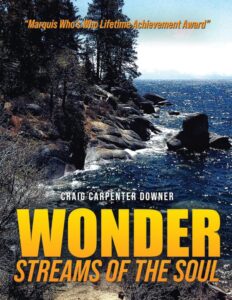