SULLANA, Peru, June 3, 2018 (ENS) – On April 14, Alejandro Zegarra-Pezo and his son were invited by people they believed to be trustworthy to enjoy a turkey sandwich in their home town of Sullana, in Peru’s northern region of Piura. Relaxing before the TV, they consumed the turkey sandwich, Alejandro eating most of it.

They retired to their accustomed bedroom at this home, but four hours later Zegarra began to experience strong stomach pains, vomiting, shortness of breath, lack of visual focus, dizziness and difficulty walking. His symptoms got worse and his son started to show similar symptoms. 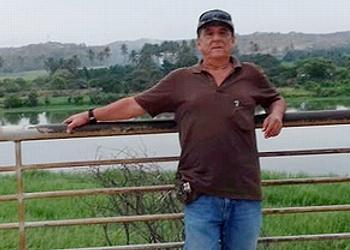 With no relief in spite of home remedies, they entered Sullana’s hospital before dawn on April 15, and it was determined that Alejandro Zegarra was at very serious risk for his life. He was admitted to the Emergency Ward.

Blood tests indicated that the Zegarras had been poisoned by Parathion, a dangerous insecticide in the phosphate class. He was immediately given intravenous treatment and constantly monitored.

During the nine hours Alejandro Zegarra remained in the hospital, he was interviewed by Sullana police, social workers as well as doctors and these professionals indicated that the evidence pointed to an assassination attempt on Zegarra and his son.

Shortly after his release, Zegarra filed an official charge with the Sullana Police against the two individuals who had prepared and served the questionable meal.

Coincidentally, one of the meal preparers was an expert in pesticides.

The insecticide expert had worked for and was strongly associated with some of the large mining companies that Zegarra has been critical of in his work to preserve Andean forests and alpine zones and endangered species.

As part of an ongoing 20-plus year Andean Tapir Fund project, Zegarra has sought to preserve the endangered Mountain/Andean Tapir, along with many other rare, endemic, and threatened species and their habitats.

He has insisted that his nation and his state’s very own conservation laws be enforced and that the highly valuable natural ecosystems that occur here not be betrayed in exchange for the relatively short-term gains from mining.

Zegarra, who has a university education, has obtained police protection, as it is suspected that he is being targeted by criminal elements who, in addition to mining interests, may be associated with illegal burro killings as well as illegal killings and trafficking in endangered species, including the Mountain Tapir. 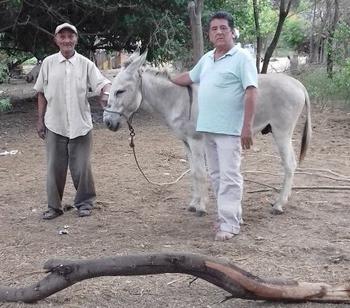 Most recently, Zegarra has been active in exposing and clamping down on the illegal killings of both wild and domestic burros in northern Peru. This is being perpetrated to supply Chinese merchants with the skins of these animals for the production of a substance known as “ejiao” that is widely used in Asia, as a sort of general tonic. He has initiated official investigations and legal suits concerning this activity.

The wild burros of northern Peru are protected by law and their value as important seed dispersers, particularly of the widely-used carob bean tree, is widely recognized.

Since the 1980s, Zegarra has also conducted ecological surveys of the region, given talks, appeared on radio and TV, and initiated legal actions to preserve wilderness areas and important, rare, and/or endangered species of animals and plants.

His activities include legal investigations and actions to prevent the takeover of the Andean ranges in the Piuran and Huancabamban regions where one of Peru’s last major Mountain Tapir populations live. 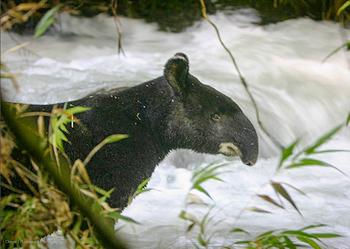 One of an estimated 2,500 Mountain/Andean Tapirs
remaining in the wild, March 2008
(Photo by Diego Lizcano)

The Mountain Tapir, Tapirus pinchaque, is classified as in critical danger of extinction according to Peruvian law and since 1994 has been classified by the International Union for the Conservation of Nature’s Species Survival Commission as Endangered in the IUCN Red Data List of Threatened Species due to population and habitat destruction.

Zegarra has greatly aided the conservationist efforts for this species by organizing and coordinating highland communities in standing up for their rights; and large scale marches and demonstrations have taken place, including this past March and April to oppose the illegal granting of mining concessions in the Andes here.

One of the most destructive projects is known as Rio Blanco. It would involve the open pit, cyanide heap leach processes that threaten to poison five major rivers of northern Peru.

Cerro Negro is one of the best preserved of the areas being threatened and contains a fairly healthy population of Mountain Tapirs.

Exercising their rights under Peruvian law, citizens of this Andean region had a referendum in 2007 by which they rejected the proposed massive mining projects by 97 percent of the popular vote.

In addition to legal prohibitions of this scale of mining because of proximity to the Ecuadorean border and also due to the Peruvian “Decreto Supremo 034-20014-AG-Peru” protecting endangered and endemic species and their habitats, the citizens recognize the importance of protecting the headwater ecosystems of major rivers upon which their present and future livelihood depends.

This area is also of great biological fame due to its close association with the “Huancabamba Depression” known for its many endemic species, species origination and as a center for the discovery of new species.

Zegarra and his ProVida-Tapires-Burros-Peru movement has collaborated with my NGO, the Andean Tapir Fund, for three decades. He has conducted investigations, held meetings, given public talks, written articles, and initiated legal actions to protect the Mountain Tapirs and many other beleaguered species together with their Andean forest and paramo homes as well as other habitats of northern Peru.

Zegarra has shown much courage born of a genuine appreciation and caring for his homeland and the naturally occurring species that ensure its healthy future.

Anyone wishing to help Alejandro Zegarra and/or the Andean Tapir Fund and its northern Peruvian project may do so by contacting Craig Downer at: ccdowner@aol.com.

{American wildlife ecologist Craig C. Downer is a member of the Tapir Specialist Group, established by the International Union for the Conservation of Nature’s Species Survival Commission.}